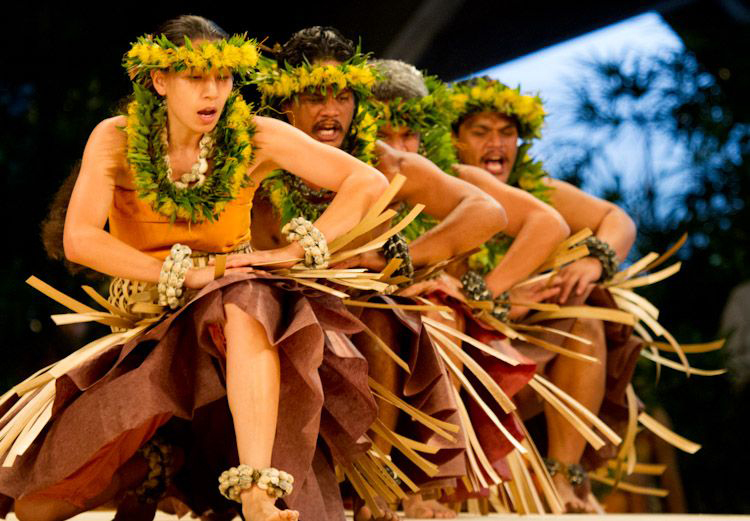 “Hula is a reflection of life. Hula is a way of telling history.”   – Pua Kanaka‘ole Kanahele

Hālau o Kekuhi is celebrated for its mastery of the ‘aiha‘a style of hula (dance) and oli (chant). The ‘aiha‘a is a low-postured, vigorous, bombastic style of hula that springs from the eruptive volcano persona Pele and Hi‘iaka, characteristic of Hawai‘i Island’s creative forces. Hālau o Kekuhi has earned local, state, national, and international recognition for their art. The group is the hālau hula (classical dance company) and the center of cultural knowledge for Edith Kanaka‘ole Foundation; Edith Kanaka‘ole was at the forefront of the Hawaiian Renaissance of the 1960s & 70s, which brought Hawaiian culture back to its central role in the life of the islands. Currently, the Hālauʻs performances have been reflective of the natural phenomenon of the volcano, which has been an active occurrence on the island for the last 10 years.

The cultural beliefs and practices that anchor the group radiates from the traditional practices of the hālau hula that can account for eight generations of kumu hula (hula masters). The leadership of the dance company is transmitted by matrilineal succession and with the passing of Edith Kanakaʻole, her daughters Pualani Kanakaʻole Kanahele and Nālani Kanakaʻole, both National Heritage Fellows, assumed the role of Kumu Hula. In 2007 Pualani relinquished her position to her daughters, Kekuhi Kealiikanakaʻoleohaililani and Huihui Kanahele-Mossman. The hālau is now under the direction of Nālani and Huihui.